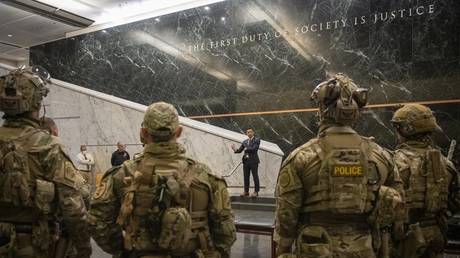 The acting head of the Department of Homeland Security has praised federal officers who face off Portland protesters. Tensions in the city are high, as netizens repost images of unmarked agents, comparing them to the Gestapo.

“Our men and women in uniform are patriots. We will never surrender to violent extremists on my watch,” Acting Homeland Security Secretary Chad Wolf wrote on Twitter.

Sharing photographs of him meeting with law enforcement and inspecting vandalized buildings, the Department of Homeland Security (DHS) chief said that police and federal officers would “prevail” against the “violent anarchists” who have held nightly demonstrations in the city for almost two months.

These valiant men and women have defended our institutions of justice against violent anarchists for 48 straight days. We will prevail. pic.twitter.com/Qo9XoCyH2N

The patriots are the protestors. You’re standing with the Gestapo.

Others boasted that the police and their federal reinforcements would be forced out of the city. “Portland is your Afghanistan, Chad. You will not prevail. You will be exposed and, eventually, expelled,” read one reply.

One Twitter user complained that “every single person” in the photographs shared by Chad were “white males” and “criminals.”

Wolf arrived in the city on Thursday to meet with federal law enforcement officials about the growing unrest. In a statement, the interim DHS head condemned the “rampant long-lasting violence” in Portland, and denounced the demonstrators as a “violent mob.”

His visit to the city coincided with mounting claims that federal officers deployed to protect Portland’s federal courthouse have been “kidnapping” protesters using unmarked vans.