veverel » Latest News RT » Your past seasonal colds could actually SAVE you from Covid-19, Oxford study suggests

Your past seasonal colds could actually SAVE you from Covid-19, Oxford study suggests 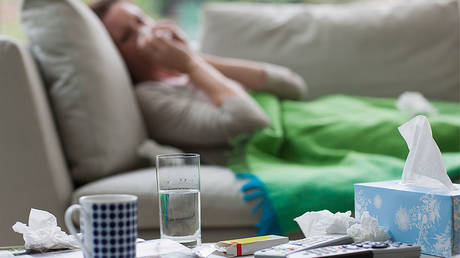 According to research, some of the population may already have immunity to the deadly coronavirus without having been infected. If this proves to be true, it could limit the further mortal consequences of the disease worldwide.

A group of scientists from Oxford University conducted a new study which suggests exposure to seasonal coronaviruses – including the common cold – could already have provided the population with the immunity needed “to mitigate a potential second wave” of Covid-19.

The paper is yet to be peer-reviewed, but if it’s proven credible, it could be a huge breakthrough in the fight against coronavirus.

While it’s widely believed that the herd immunity threshold (HIT) “required to prevent a resurgence of the virus” should exceed 50% “for any epidemiological setting,” Oxford scientists demonstrated that it “may be greatly reduced if a fraction of the population is unable to transmit the virus due to innate resistance or cross-protection from exposure to seasonal coronaviruses.”

The herd immunity threshold is passed once a large enough percentage of the population becomes resistant to the infection, resulting in a collective form of protection.
The researchers found that the percentage of the population needed for the Covid-19 HIT could, in reality, be just 10-20%. These results “suggest that sufficient herd-immunity may already be in place to substantially mitigate a potential second wave,” stated the paper.

Meanwhile, according to the European Centre for Disease Prevention and Control, in Europe – including the UK – the HIT degree is still too low to claim that it’s strong enough to resist a new pandemic wave. “It is unlikely that population immunity levels reached by winter 2020-2021 will be sufficient for indirect protection,” it said.

The second coronavirus wave could strike the world in winter and be two or even three times deadlier than the first, British scientists have warned. This would echo what happened in the 20th century with the Spanish flu. Scientists warn that lifting lockdown restrictions too early could definitely trigger new massive outbreaks.