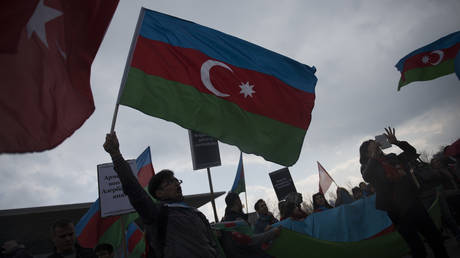 An Azerbaijani protest outside Armenia's embassy in London became heated after being met with a counter-rally of Armenians living in the British capital, amid a major escalation between the two former Soviet republics.

The demonstrators, carrying their country's national flags, stood on opposite sides of the road on Friday, chanting slogans. However, at some point an exchange in insults transitioned into a physical altercation, with the police forced to intervene.

Azerbaijani and Armenians clash at a protest in London pic.twitter.com/CQNk2bbh1V

It is unclear who initiated the violence, with Azeri and Armenian press and social media users each accusing the other country of being the provocateur.

And then they call us the aggressors? Right in front of the Armenian Embassy in London. Look at that Azeri dog who came to the Armenian side and ripped the poster from someone’s hand in order to cause chaos. pic.twitter.com/SUouGuCm3m

Tensions are currently high between Azerbaijan and Armenia following border shelling on Sunday, which spawned further skirmishes between the two in the days that followed. The outbreaks of violence have claimed at least 17 lives on both sides.

The bone of contention between the neighboring South Caucasus states is Nagorno-Karabakh, a large Armenian-populated enclave inside Azerbaijan which declared independence from Baku three decades ago. The two countries fought a bloody war over the region in the early 1990s, which ended with a ceasefire brokered by Russia, the US and France.

The new spike in tensions between Azerbaijan and Armenia became the main topic of the Russian Security Council session chaired by President Vladimir Putin on Friday. Moscow called upon all sides to adhere to the ceasefire, and offered to mediate peace talks between Yerevan and Baku, just like it did in 1994.