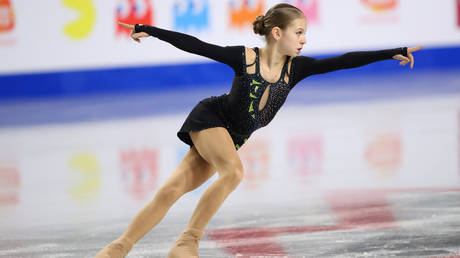 Two-time Olympic champion Evgeni Plushenko says he's worked hard on the emotional aspect of Alexandra Trusova’s programs which were previously criticized for a lack of artistry and a dominance of jumps.

The 16-year-old, who has the most difficult technical content in women’s skating, has consistently been under fire for putting a clear emphasis on her jumps instead of interpreting her programs.

READ MORE: ‘You cannot skate till 30 and win’: Russian figure skating prodigy Alena Kostornaia says she might RETIRE after 2022 Olympics

Plushenko, who has been working with Trusova for almost two months, claimed to have improved the skater’s choreographic skills – noting that her programs will not only comprise jumps.

“We have made two programs for Sasha in cooperation with Sergey Rozanov. She will take up two completely different roles. Her programs will be complex, not just 'run-up and jump.' We have worked hard on step sequence, connections. Her steps will be enormously complicated like in men’s skating,” Plushenko said.

Trusova, who is the first female skater to land a quad at an international competition, made headlines in May after parting ways with her long-time coach Eteri Tutberidze.

The skater hasn’t yet revealed the reason for her split, but obviously unimpressive results last season were behind her decision to change coach.