Ruth Bader Ginsburg announces cancer recurrence, says she will remain on the US Supreme Court at ‘full steam’ 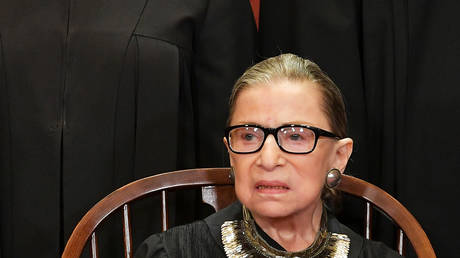 Liberal US Supreme Court Justice Ruth Bader Ginsburg has revealed she is undergoing chemotherapy for the recurrence of her cancer, but she insists she will remain on the court throughout her treatment.

Ginsburg, 87, released a statement on Friday saying that she has been undergoing chemotherapy since May 19 to tackle liver cancer, and that the treatment is “yielding positive results.”

Justice Ruth Bader Ginsburg announces that her cancer has re-emerged and she has been undergoing chemotherapy since May.

"I have often said I would remain a member of the Court as long as I can do the job full steam. I remain fully able to do that," she says in a statement. pic.twitter.com/XV5wWok5M3

Despite the early immunotherapy stage of her treatment proving “unsuccessful,” Ginsburg’s July 7 medical scan showed a “significant reduction” of the liver lesions and no new disease. Though the judge will be undergoing bi-weekly chemotherapy sessions, she reiterated her readiness to continue on with her duties.

“I have often said I would remain a member of the court as long as I can do the job full steam. I remain fully able to do that,” she concluded.

Ginsburg, the oldest member of the court, was admitted temporarily to hospital on Wednesday to clean a bile duct stent. She said that recent previous hospitalizations were unrelated to the cancer.

US Supreme Court justices are appointed by the US president, with confirmation from the Senate, to serve a lifelong term, unless they decide to retire or resign. The indefinite nature of their service and the legal power that the court wields has made its membership a key political topic, as the Democratic and Republican parties each strive to place their ideological allies on the bench. The nine-member court is considered to have a 5:4 conservative majority, with Ginsberg among the liberal minority.

Donald Trump has appointed two justices of his choosing so far during his term: Neil Gorsuch and Brett Kavanaugh.

The US’ top court is currently on recess, though it has recently ruled on two death penalty appeals and a Florida voting access case.