‘Toronto is in Canada, Laura’: Internet goes wild after Laura Ingraham slams Biden & Trump for not caring about Canuck Catholics 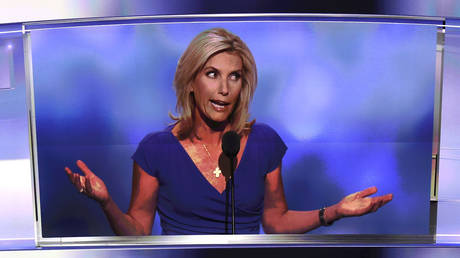 Fox News' Laura Ingraham has been mercilessly mocked for accusing Donald Trump and Joe Biden of not protecting religious liberty, after Catholic churches were advised to suspend communion during the Covid-19 pandemic… in Canada.

Ingraham tweeted on Friday that there is “not a prayer” of a chance that Democrat candidate Biden would do more to protect religious liberties than Trump if elected president. In the post, the Fox News host linked to a story about Toronto churches being asked by the Ontario Ministry of Health to suspend “all communion-related activities” during the coronavirus pandemic.

Will Joe Biden do more to protect religious liberty than Donald Trump? Not a prayer. “City of Toronto Bans Catholic Churches From Administering Holy Communion” https://t.co/9oR3YI7Zkf

Ingraham’s tweet and seeming lack of geography knowledge prompted a wave of mockery, as netizens repeatedly pointed out that Toronto is of course a city in Canada, not the US. Such was the torrent of criticism that the phrase “Toronto is in Canada” began to trend on Twitter.

Toronto is in Canada, Laura.

“If this gets out, Biden will never carry Toronto,” one commenter joked. Others tweeted pictures of maps to the “ignorant” Fox host.

Your ignorance knows no bounds.
Toronto lies in Canada just ever so slightly outside of the bounds of US jurisdiction
I've included a map as you clearly failed geography pic.twitter.com/jnRojOy2Dg

“Biden has done nothing about the crime in Montreal and don't get me started on Quebec,” another quipped, adding that the Democrat’s “infrastructure bill for Brussels is quite good.”

Others put a different spin on the debacle, suggesting sarcastically that Ingraham was advocating for a US takeover of Canada so that Biden or Trump could crack down on the diocese of Toronto.

Does Laura Ingraham want us to invade Canada to impose our religious values on the diocese of Toronto? Or does she not know Toronto is in Canada?

A few geography buffs chimed in, however, to point out that there is in fact a place named ‘Toronto’ in the United States — though many were skeptical that Ingraham was referring to the small city in Ohio.

Why is this so hard pic.twitter.com/tV3n11K4xZ

Ingraham's usage of a non-US story to make a point about religious freedom in the US echoed a recent ad put out by the Trump campaign, which promised the president’s supporters that he would “protect” Brazil's iconic Christ the Redeemer statue from potential vandalism.