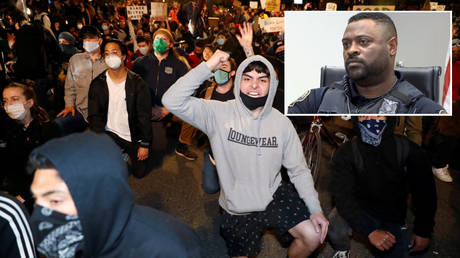 Portland police officer Jakhary Jackson has detailed the stunning abuse he has faced during Black Lives Matter protests and blasted the “hypocritical” demonstrations for having fewer minorities than the police they’re fighting.

In a wide ranging discussion Officer Jackson laid out some of his experiences on the frontline of the civil unrest which has unfolded in the city for nearly two months.

The cop reveals that he has been violently attacked with explosive devices, white protesters have hurled racist abuse at him and protesters routinely label white officers racists “without even knowing anything about them.”

Jackson branded the protests as “bizarre” and said they often feature more minorities wearing police uniforms than on the side of the demonstrators.

Black people can’t think or talk for themselves. Woke white people want to patronise us and treat us like children.

We BELONG to them. pic.twitter.com/Ko4zSb49TC

“It says something when you’re at a Black Lives Matter protest and you have more minorities on the police side than you have in a violent crowd,” Jackson explained. “You have white people screaming at black officers, ‘you have the biggest nose I’ve ever seen!’ You hear these things and you go, ‘are they gonna say something to this person?’ No.”

The interview was released by the Portland Police Department this week after being recorded earlier this month. The entire conversation is 27 minutes long but several of Jackson’s comments have gone viral in shorter Twitter videos.

Jackson said that white protesters routinely behave in a condescending manner and scream at cops, telling them to quit the force. “Having people tell you what to do with your life, that you need to quit your job. Saying you’re hurting your community but they’re not even part of the community. And you as a privileged white person telling a person of color what to do with their life – and you don’t even know what I’ve dealt with or what these white officers that you’re screaming at — you don’t know them. You don’t know anything about them,” he said.


Jackson said the protesters’ views of white cops isn’t supported by reality. He explained that his white colleagues have repeatedly leapt to his defense when he has been racially abused but nonetheless the demonstrators brand them as racists.

“They’re accused of being racist when I’ve seen those officers helping people of color, getting blood on them, trying to save someone’s life that’s been shot in gang violence,” he explained. “They’re truly trying to help save someone’s life and they’re turned around and called a racist by people who have never had to put themselves out there. It’s disgusting,” he added.