veverel » Latest News RT » 'I was warned by other women': Scandal over alleged sexual harassment ERUPTS at Redskins as NFL team owner faces pressure to QUIT

'I was warned by other women': Scandal over alleged sexual harassment ERUPTS at Redskins as NFL team owner faces pressure to QUIT 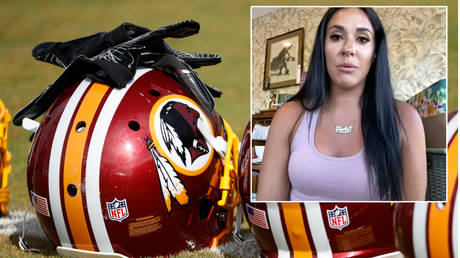 A female marketing manager has claimed she was subjected to vile personal abuse while being complimented on her body during a nightmare 18 months at the Washington Redskins, speaking as one of 15 ex-employees to make allegations.

Emily Applegate said former chief operating officer Mitch Gershman had routinely made her cry by berating her for "trivial" problems while giving her physical compliments between February 2014 and 2015.

She came forward as part of a dossier of allegations compiled by a Washington Post investigation that also revealed texts from Richard Mann II, a former assistant to head of personnel Alex Santos, reportedly asking another female employee to discuss an office debate over whether her breasts were real and repeatedly telling her of his plan to "squeeze her butt".

Six employees accused Santos of pressuring them to date him, while two female journalists told the outlet that they had also been harassed by him.

Former business president Dennis Greene departed after a New York Times story exposed a scandal involving cheerleaders being forced to pose topless or in body paint for the pleasure of "well-connected men" during a trip to Costa Rica.

Some of the cheerleaders were also said to have been asked to accompany men to a nightclub, feeling that they could not refuse the request.

"It really took people no time to comment on my appearance," Applegate, now 31, said of an experience that she called "the most miserable" of her life.

"It really took no time for Mitch to let me know that I was incompetent at small tasks that he was demanding of me. I was warned by women who had not worked for him indirectly, in the same department, that 'this is what you're going to get and you're going to have to have a tough face and just deal with it.'

"I can do that to a certain extend but eventually you just break down. I lived with a girl who also worked with the team so we would carpool together and talk about work.

And the reason i refuse to look at Twitter trolls opinions https://t.co/TdVEJMYVRy

"On the way back, there would be so many times that I would be crying. She would have to console me on that. Then you wake up and you do it again, it's dreadful.

"I would walk out of very important people's offices in tears. I couldn't stop the tears from coming down my face, they saw it happening because I was so embarrassed that I was being treated that way in front of people. If you get called stupid in front of people so many times, that's really embarrassing."

Club owner Dan Snyder, who was not accused of being directly involved in any of the alleged incidents, issued a statement saying that they had "no place in our franchise or society."

The businessman bought the club for a then-record $800 million in 1999 but has come under widespread pressure to leave or be removed by the NFL – although there is no precedent for such a move in the sport.

"The story has strengthened my commitment to setting a new culture and standard for our team – a process that began with the hiring of Coach Rivera earlier this year," he said, adding that he had hired attorney Beth Wilkinson's firm to conduct a "full, unbiased investigation and make any and all requisite recommendations."

Yeah, let's see Dan get in front of actual people live and say all of this. I won't hold my breath.


It is unheard for a company the size of the Washington Football Club not to have an HR/ Compliance Department.Snyder needs to wake up and stop running the organization like a lemonade stand.

"Upon completion of her work, we will institute new policies and procedures and strengthen our human resources infrastructure to not only avoid these issues in the future but most importantly create a team culture that is respective and inclusive of all."

Critics on social media claimed that no human resources or compliance department had existed at the team, challenging Snyder to appear in public with a response.

"If you made a complaint, it wasn't going to go anywhere," continued Applegate. "The only thing that was going to happen was you were going to get fired because you're talking about the most powerful people in the building apart from the owners, so of course no-one is going to stand up for you when the person has been there for 20 years.

"You're just some young girl who has been there for months. When it comes down to sports, the primary thing that anybody cares about is winning and sometimes it doesn't matter how they get to that point. They just want to win."

Applegate said there had been a culture of verbal abuse among top executives that filtered down to employees, resulting in Gershman frequently "cursing" and directing "derogatory slurs" at her.

“Nobody deserves to be disrespected. And for any of us women that want to get into a career that is a male-dominated force, we shouldn't be afraid that these are the things that are going to happen.”

Gershman reacted by calling the team "a great place to work." “I barely even remember who she is,” he was quoted as saying by the Post. "I can't comment on something that I can't remember.

"I would apologize to anyone who thought that I was verbally abusive.”