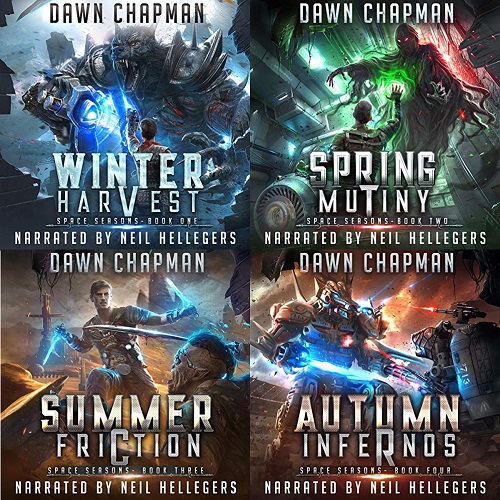 After failing the most important exam of his life, Kyle is forced into a VR war. Now, he fights on the front lines as cannon fodder for what he always assumed was the government, losing a little part of his memories with every virtual death.
0 More 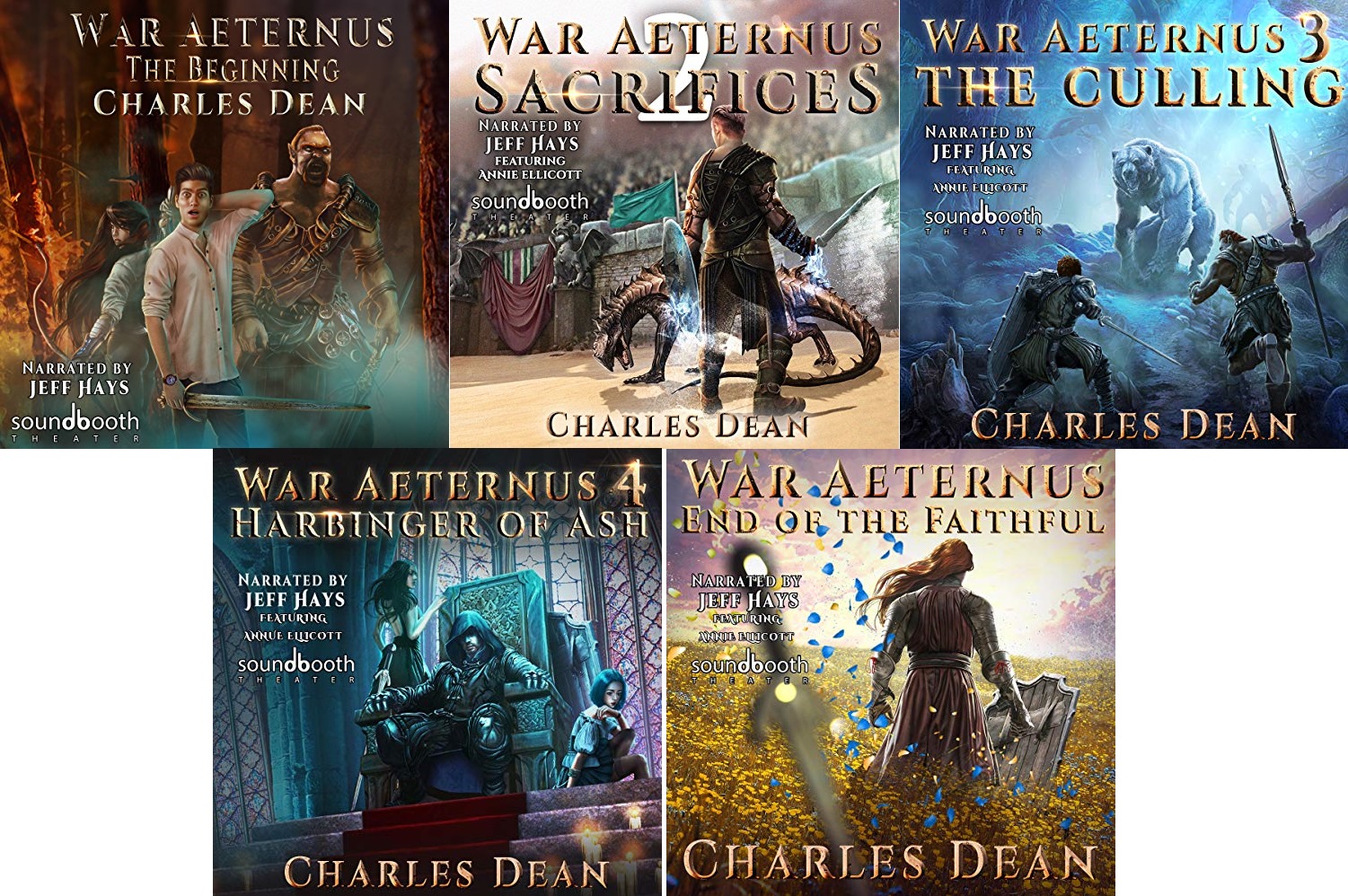 Lee is a quiet and unassuming office worker who leads a life of solitude, comfort, and routine. Day in and day out, he shuts off his brain, keeps his head down, and goes about doing his job and minding his own business. That is, he does until a drunken god shows up randomly one day and whisks him off into another world, demanding that Lee serve as his pawn in a game between the gods. Now, trapped in a completely different world full of danger, magic, and creatures he’s never imagined outside of fairy tales and video games, Lee has to figure out how to stay alive long enough to make it back home.
0 More 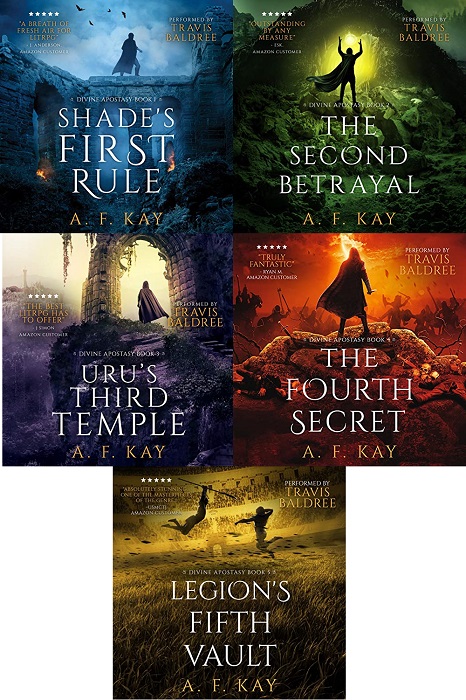 A new LitRPG world has arrived!

It's Ruwen’s Ascension Day, and he finally dies for the first time. His newly revived body can learn spells and abilities for the class given him by the Goddess Uru, and dying is no longer permanent.

Ruwen’s high intelligence makes becoming a Mage inevitable. With his new powers, he will locate his parents and clear their family name. But nothing goes as Ruwen imagined, and when a rival God tries to kill Ruwen shortly after his disastrous Ascension, his focus turns from his future to just surviving.

His choices place him in the middle of an ancient war, and he must overcome the limitations of his unexpected class to reach level five. Only then will he have the tools needed to survive. But dying now comes with a terrible penalty, and failing Uru might not only cost him his life and loved ones but his entire world.

It turns out dying on your Ascension Day is the easy part.
0 More 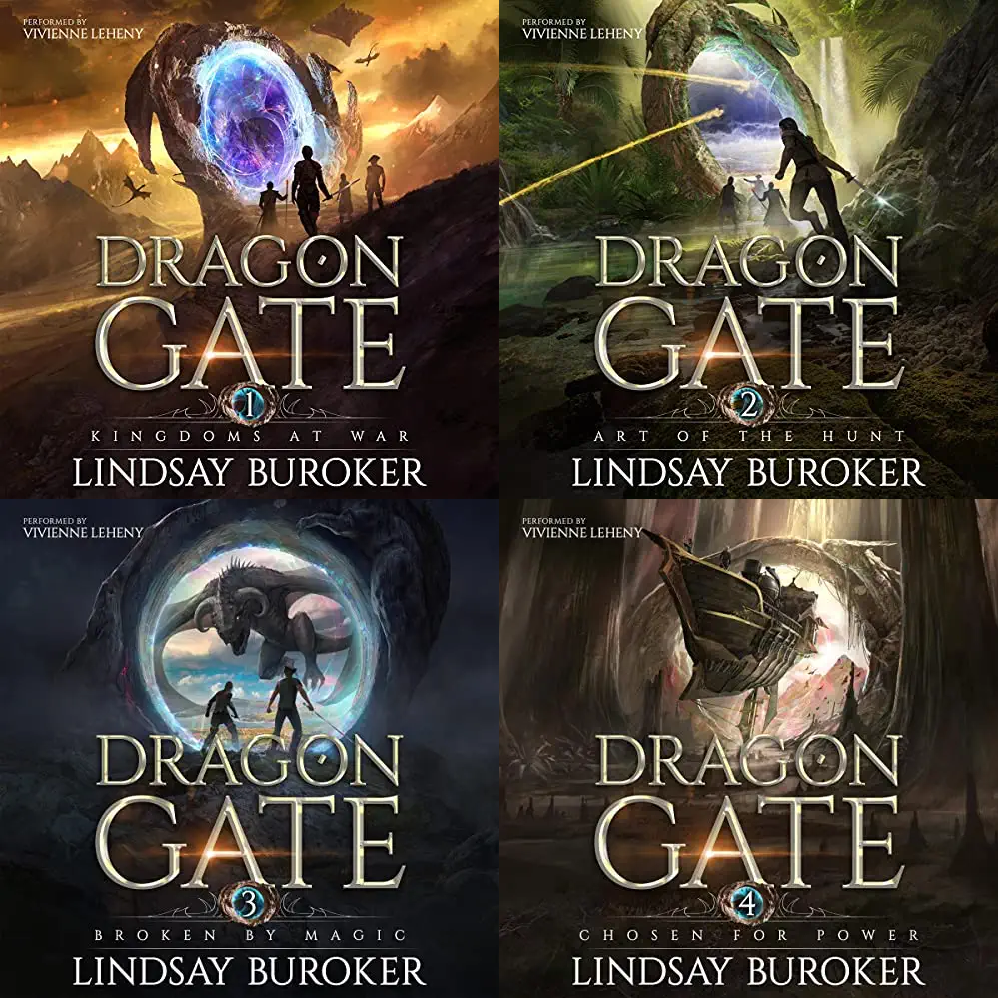 As a cartography student, Jak has always dreamed of finding the lost dragon gate and exploring and mapping distant worlds.

Developing magical powers and becoming a powerful wizard? Not a chance.

Wizards are cruel and inhumane, warring with each other from their great sky cities and keeping most of humanity enslaved. Jak wants nothing to do with them.

But when he and his archaeologist mother unearth the gate, they attract the attention of the very wizards they sought to avoid. Even more troubling, Jak starts developing magical powers of his own, powers that could rival those of the great rulers.

Fate may have given him the opportunity to change the world.

But the wizard rulers don’t like change, and when they detect threats, they send their elite assassins to eliminate them.

If Jak can’t unlock the power of the gate, and the powers within himself, the world will remain enslaved forever.
0 More 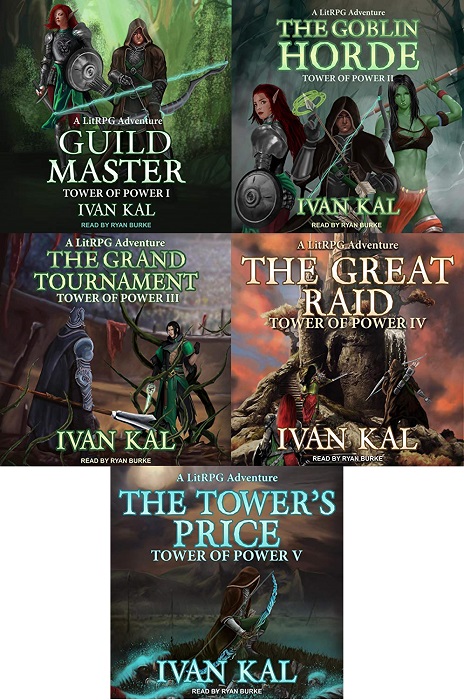 Morgan used to be a pretty normal guy. He went to college by day and played online games by night, leading his guild into new conquests - until he got hit by a car and a dude wearing a wet suit appeared in front of him. The man offered him a new chance at life in a world he had created, a world with similar rules to the games Morgan loved to play. There is the promise of great rewards and power, he says, if Morgan manages to complete the Tower of Power. Stupid name, I know.

Morgan didn't usually trust strangers who seem to have god complexes, but he was in a pinch. There's a crazy-looking dude saying he is technically not a god on one end of the tunnel and a blinding light on the other end - and he was really not digging the light.

So he accepted the offer from the surfer god-not-god.

Getting dropped into a strange new world with no idea what the rules are was not something Morgan was a fan of; and in this strange world, it seems like everything is out to eat his face. It was a good thing, then, that he stumbled onto two half-elf twins willing to help him get the hang of this strange new world.

Now, all he needs to do is survive long enough to reach this tower.
0 More 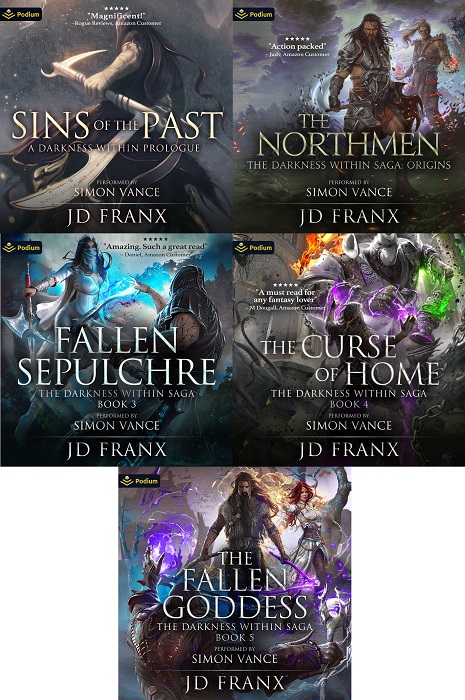 Yrlissa Blackmist has been a high-ranking member of the Broken Blade Assassin's Guild for longer than most family lines have existed.

Such a long life of killing has left plenty of dangerous enemies in its wake. An ancient witch coven, a jealous assassin, and even a demon lord all have old scores to settle.

With one last contract to fulfill, Yrlissa hopes to be free from her past and her guild forever so she can disappear with her husband and young daughter. But the past doesn't forget so easily, and neither will a betrayed guild of magical assassins. Yrlissa's only concern is to keep her new family safe, but with enemies closing in on all sides, will they become a distraction she cannot afford?
0 More 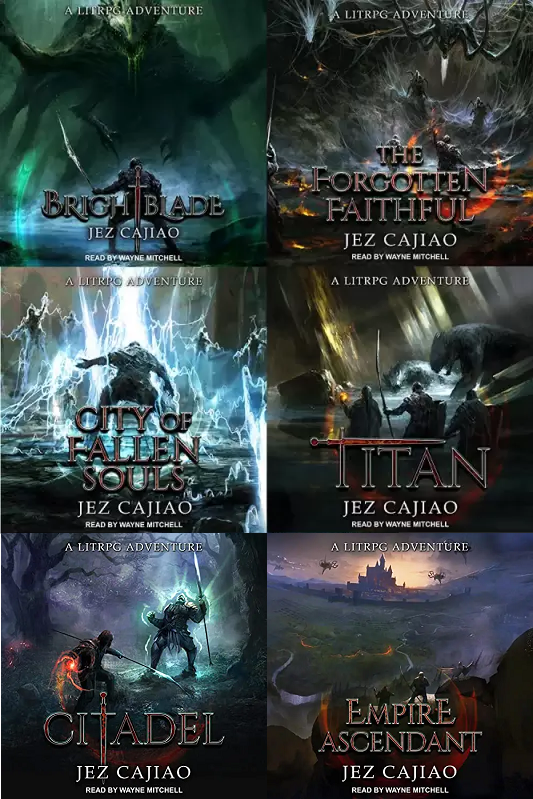 A realm aside from our own is the center of the realities, home to every spectrum of magic. From the beautiful to the terrible, it was all held in delicate balance by the Eternal Emperor and his children. For 10,000 years, the empire was the bastion that protected the sentient races from the darkness, but the revolution changed all that....

Jax is a pretty regular guy, has a job he tolerates, a girl he kinda, sorta loves...and he fights creatures from the UnderVerse in his sleep, leaving him covered in horrific scars when he wakes up.

When his brother vanishes and five years later he's kidnapped as well, he's given a stark choice by his asshat of a father: Go to the UnderVerse in reality, travel to the capitol of that ruined realm at the center of reality, and open a portal for the Noble Houses to return home...or die.

That's the good news. The bad is that he has to survive the arena first, to prove his right to go. Twelve will enter, only one can leave....
0 More 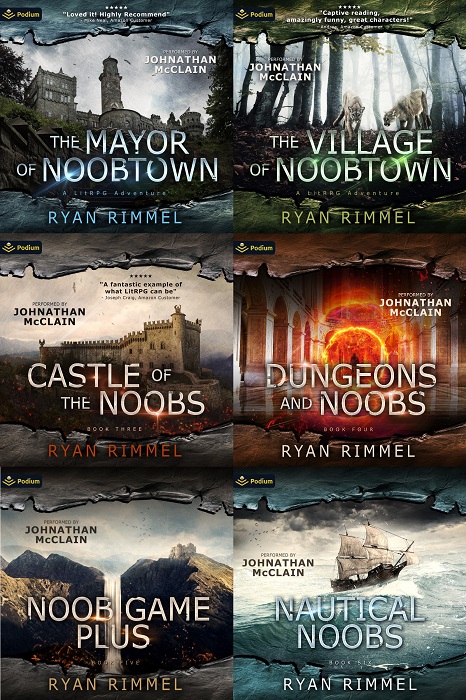 After dying and being reborn into a world that's built like a video game, Jim has found himself stuck in a very old-world style new-player zone for low-level adventurers. Unfortunately, the zone fell out of use centuries ago, and no one told the monsters they were supposed to take it easy on the Noobs. Even worse, the only new player around is Jim.

Jim has been given an opportunity, and he'll do his best to take advantage of it. 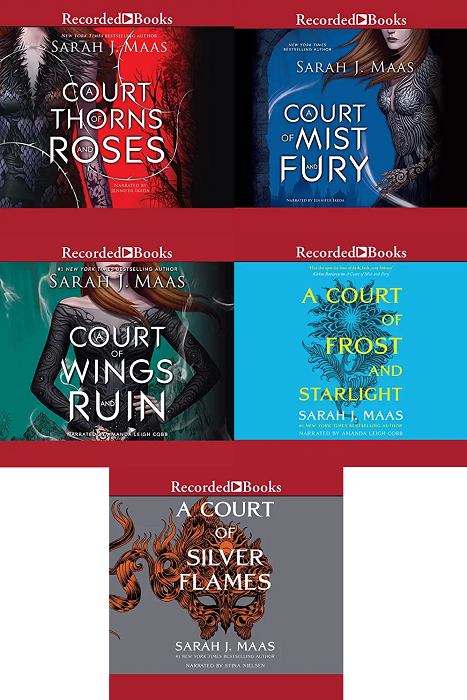 When 19-year-old huntress Feyre kills a wolf in the woods, a beast-like creature arrives to demand retribution for it. Dragged to a treacherous magical land she only knows about from legends, Feyre discovers that her captor is not an animal, but Tamlin - one of the lethal, immortal faeries who once ruled their world. As she dwells on his estate, her feelings for Tamlin transform from icy hostility into a fiery passion that burns through every lie and warning she's been told about the beautiful, dangerous world of the Fae. But an ancient, wicked shadow over the faerie lands is growing, and Feyre must find a way to stop it... or doom Tamlin - and his world - forever.
0 More

Half-Fae, half-human Bryce Quinlan loves her life. Every night is a party and Bryce is going to savour all the pleasures Lunathion - also known as Crescent City - has to offer. But then a brutal murder shakes the very foundations of the city, and brings Bryce's world crashing down.

Two years later, Bryce still haunts the city's most notorious nightclubs - but seeking only oblivion now. Then the murderer attacks again. And when an infamous Fallen angel, Hunt Athalar, is assigned to watch her every footstep, Bryce knows she can't forget any longer.
0 More
Back Next